This case settled after jury selection in Kings County Supreme Court for the sum of $1,075,000.00

The Plaintiff, a 53 year old union carpenter with the New York District Counsel of Carpenters, claimed that while working in a shaft he was struck in the head by a tennis ball sized piece of hardened concrete that fell from 30 to 60 feet above him during a concrete pour.

The accident occurred at a job site in the Bronx.

Plaintiff argued that the defendant was responsible for the accident as there were no protective devices around the top of the shaft to prevent falling concrete on the date of the accident but that on prior occasions he had seen workers use plywood, toe-kicks and nets to prevent concrete from falling down upon workers below.

Importantly, prior to trial our firm was able to obtain summary judgment in favor of the plaintiff on the issue of liability against the city pursuant to section 240(1) of the New York State Labor Law.

The plaintiff claimed that because of the accident he has suffered multiple injuries including traumatic brain damage and post-traumatic stress disorder. Although the plaintiff had neither surgeries nor positive readings of injury to the brain via MRIs or CAT scans, Mr. Miller was able to obtain a significant settlement award for the plaintiff. 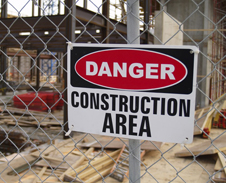