Facts: Plaintiff, 45 years old, claimed that she was looking inside a garbage bin next to her apartment when the forklift of the defendant city’s garbage truck pinned her to the bin and then flung her over the side of the truck to the street. Defendant contended that the sanitation workers did not see the Plaintiff because she was inside the bin. Plaintiff argued that if she had been inside the bin she would have been thrown into the back of the garbage truck 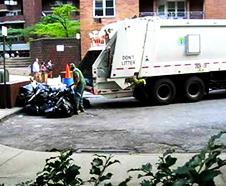